New Album Dark Skies Out On
September 14th
Pre-Orders Available Now
Set To Tour with The Devil Wears Prada This Fall
Tickets On Sale Now
August 10, 2018 – Dallas, TX – Fit For A King are giving fans a look into their more vulnerable side through the release of their latest single “When Everything Means Nothing” today. The track, which is premiering with Alternative Press today touches upon the struggle of comparing yourself to other people’s “highlight reels” on social media. “We just wanted people to know that no one is living a perfect life. If you’re struggling through depression, anxiety, anything – it’s normal. It doesn’t make you less. People are going through these things even if you can’t see it” shared vocalist Ryan Kirby in an exclusive interview. To hear the melodic rock anthem and read the rest of the interview, head to AltPress.com.
“When Everything Means Nothing” joins previously released singles “Tower of Pain” and “The Price Of Agony” and “Backbreaker.” These tracks help make up the upcoming LP Dark Skies, which was recorded, produced and mixed by the legendary Drew Fulk (I Prevail, Motionless In White, Memphis May Fire) and is set to be released on September 14th with Solid State Records.
Fit For A King is about to wrap up their headlining US tour with support from Like Moths To Flames and Currents. Later this Fall, they will be joining genre legends The Devil Wears Prada on their 10 Year Anniversary Tour of With Roots Above And Branches Below. A full list of tour dates are below, with more information and tickets available at http://www.fitforakingband.com/.
Upcoming Tour Dates:
August 10 – Spartanburg, SC – Ground Zero
August 11 – Orlando, FL – Sound Bar
August 12 – Margate, FL – O’Malley’s Sports Bar
August 14 – Jacksonville, FL – 1904 Music Hall
September 27 – Seattle, WA – El Corazon+
September 28 – Vancouver, BC – Rickshaw Theatre+
September 30 – Edmonton, AB – Union Hall+
October 1 – Calgary, AB – The Gateway+
October 3 – Winnipeg, MB – The Garrick Centre+
October 4 – Minneapolis, MN – Varsity Theater+
October 5 – Iowa City, IA – Blue Moose Taphouse+
October 6 – Milwaukee, WI – The Rave II+
October 7 – Detroit, MI – St. Andrew’s Hall+
October 9 – Indianapolis, IN – Old National Centre+
October 10 – Cincinnati, OH – Bogart’s+
October 11 – Nashville, TN – Exit Inn+
October 12 – Springfield, MO – The Riff+
+ – Tour with The Devil Wears Prada
Dark Skies is the band’s evocative declaration of a hard won victory. “This album is far from happy. It’s about personal struggles,” explains singer Ryan Kirby. “It touches on many subjects relevant to all of our daily lives.” Fans can pre-order Dark Skies digitally on iTunes and physically on MerchNow. 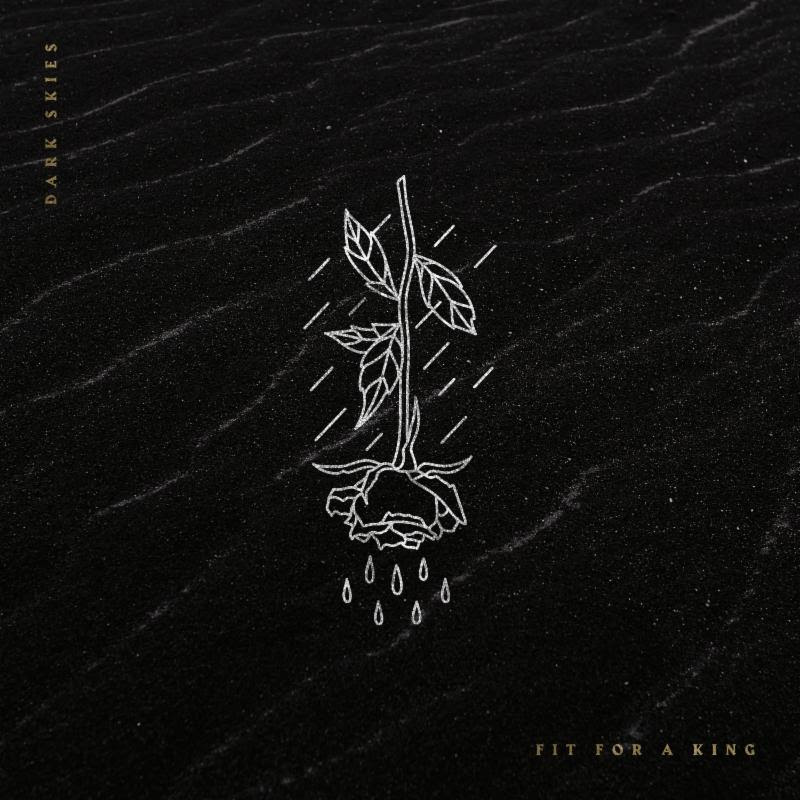 Dark Skies Tracklisting:
1. Engraved
2. Price of Agony
3. Backbreaker
4. Anthem of the Defeated
5. When Everything Means Nothing
6. Youth | Division
7. Shattered Glass
8. Tower of Pain
9. Debts of the Soul 10. Oblivion
No matter the political divisions, the staggering alienation arising from our paradoxical and increasingly “connected” world, or the mistakes we all make, Fit For A King offer a foundation of open-mindedness and compassion. “We’re a very transparent band. We aren’t pretending to be something we’re not,” says Kirby. “We don’t want to act like rock stars and we also don’t want to act like we’re poor musicians that can barely eat everyday. We don’t portray a false image. We want people to know exactly who we are.”
Fit For A King cherishes unwavering honesty. Even under Dark Skies.
Fit For A King was built with bootstrap ethics and do-it-yourself vigor. On the strength of self-released material, the group joined Solid State for a string of successful albums that connected with the downtrodden and dispossessed. Creation/Destruction (2013) debuted at Number 6 on the Hard Rock chart. Slave to Nothing (2014) cracked the Top 50 of Billboard’s Top Current Albums. Deathgrip (2016) climbed to Number 5 among Hard Rock Albums. Now, with the band’s forthcoming release, Dark Skies, on the way, Fit For A King is looking to, once again, dominate the hard rock/metalcore scene through a collection of diverse anthems powered by the undeniable weight of truth-telling emotional vulnerability.
Fit For A King is Ryan Kirby (vocals), Bobby Lynge (guitar), Jared Easterling (drums), and Ryan “Tuck” O’Leary (bass/vocals).
Follow Fit For A King:
Website:  http://www.fitforakingband.com
Facebook: https://www.facebook.com/fitforakingband/
Twitter: https://twitter.com/fitforaking
Instagram: https://www.instagram.com/fitforaking
Share