Festival producer Danny Wimmer Presents today announced the bourbon lineup for the 2018 installment of Bourbon & Beyond, the world’s largest bourbon festival. The annual celebration of award-winning bourbons, master distillers, legendary musicians, chefs, and an unforgettable showcase of the craftsmanship, soul and spirit of Louisville will be held Saturday, September 22 and Sunday, September 23 in Louisville, Kentucky.

Look for the full Bourbon & Beyond festival music and culinary lineup announcement when tickets go on sale in early April.

Wimmer continues, “Bourbon & Beyond takes that a step further. Louisville is hitting on all cylinders right now because of its amazing food scene and the bourbon enthusiasm. My goal is to continue to help highlight all of the reasons to visit Kentucky, especially the incredible distillery experiences that each offer a unique window into the history, culture, and spirit of the region.”

“It is unprecedented in bourbon history to see distilleries and master distillers receive this kind of national attention and prominence,” says Fred Minnick. “For a spirit that was left for dead in the 1980s, it excites me to see a promoter like Danny Wimmer treating Kentucky’s bourbons as world-class rockstars. Bourbon & Beyond honors every bourbon pioneer that came before.”

Danny Wimmer Presents is not the only one to believe in Louisville. Travel + Leisure ranks Louisville as one of the must-see cities year in and year out. Top Chef just announced that Season 16 will be filmed in Louisville. And last year at Bourbon & Beyond, more than 50,000 attendees witnessed a weekend of musical, culinary and bourbon craftsmanship through Stevie Nicks, Eddie Vedder and Steve Miller Band, and cocktails and bourbons paired with celebrity chefs Carla Hall, Ed Lee and Tom Colicchio.

This food and bourbon ascension was no accident. Several years ago, Louisville Mayor Greg Fischer worked with culinary, bourbon and other Louisville business leaders to build what he now calls “bourbonism.”

“Bourbon & Beyond is a combination of fantastic bourbon, food and music that can’t be found anywhere in the world except right here in Louisville. Our city’s bourbonism sector is flourishing, and helping make Louisville a year-round tourist attraction for bourbon fans who know they can only find the real deal in this region,” said Louisville Mayor Greg Fischer. “We’re excited to hear this update and are already looking forward to another tremendous festival in September.”

“Bourbon is an authentic part of the spirit and culture of our city and we look forward to the return ofBourbon & Beyond,” says Karen Williams, President & CEO of the Louisville Convention & Visitors Bureau. “Events like this put Louisville on the national stage and enhance our city’s reputation as being a go-to festival destination. They also draw a large number of visitors to enjoy a weekend of music by national performers and experience our one-of-a-kind bourbon scene.”

Bourbon & Beyond is part of DWP’s previously announced 10-year plan to grow bourbon related entertainment in Louisville which includes Louder Than Life, a future country music festival and a spirits conference to be launched in 2020. 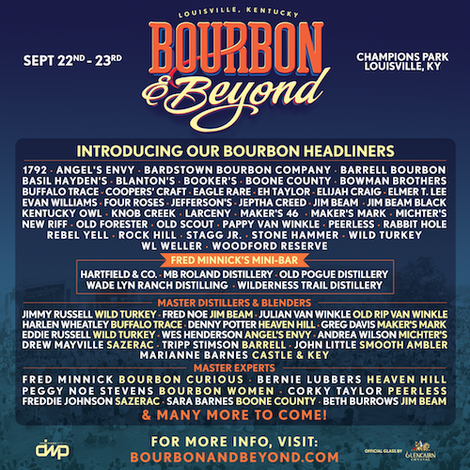