First-Ever Sonic Temple Art + Music Festival Welcomes Foo Fighters, System Of A Down, Disturbed, Bring Me The Horizon, Ghost, The Prodigy & Many More

Multiplatinum artists Foo Fighters, System Of A Down and Disturbed lead the spectacular and diverse music lineup for Sonic Temple, which will also feature performances from Bring Me The Horizon, The Prodigy, Ghost, Halestorm, Lamb of God, Chevelle, Joan Jett And The Blackhearts, The Cult, and many other chart-topping and up-and-coming music artists. SiriusXM’s Comedy & Spoken Word Tent will include comedy from Andrew Dice Clay, Pauly Shore, and others, as well as a spoken word set from Henry Rollins. The festival will feature three music stages, premium food and beverage selections, art installations, and enhanced onsite experiences.

System Of A Down‘s Shavo Odadjian says, “Although in its inaugural year, Sonic Temple‘s pedigree is proven, and its roots are strong; it made total sense for us to be involved. One could argue that it was a long time coming. We’ll see you all in Columbus this May.”

David Draiman of Disturbed says, “We are honored to share the stage with all of our amazingly talented friends and colleagues at the upcoming Sonic Temple Festival in Columbus, Ohio. Are You Ready?!?!” 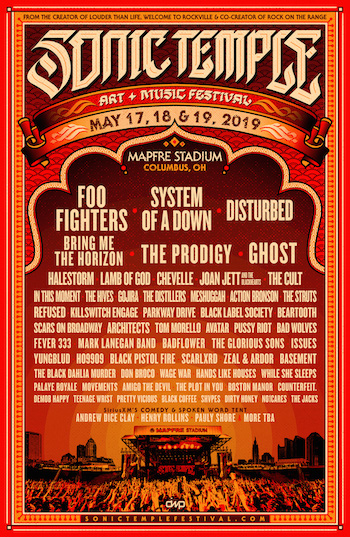 The inaugural Sonic Temple Art + Music Festival replaces the long-standing Rock On The Range, America’s largest and most acclaimed rock festival, which routinely sold out over its 12-year span.

Danny Wimmer, founder of Danny Wimmer Presents said, “I am so proud of what we accomplished with Rock On The Range, and with the debut of Sonic Temple Art + Music Festival, we’re excited to bring our devoted rock fans and the city of Columbus a one-of-a-kind, world-class event that expands on the festival experience. The idea behind Sonic Temple is walking into something bigger than yourself, where YOU belong, or where you were always meant to be. The crowd is unparalleled, and the energy is electrifying, like going to a place of worship. We want this festival to be a temple of rock n’ roll. We want this to be the ultimate rock experience for the true fans who love the genre as much as we do.”

Initial ticket prices for Sonic Temple will be as follows: