After a four year hiatus, LA’s KID CADAVER is back with their new EP, Delude (Out September 21st). The five-track EP features single “sleep touching” which Buzzbands.LA called, “A pop song that finds Kid Cadaver at their most wistful and wounded.” Along with the EP announcement, the band is also releasing their video for “borderline”, edited and directed. by frontman Ray Venta.

When speaking about the new EP, Venta says that “I lived in the van for two years with the final trip being this past winter to New York City. I went to chase a girl and it didn’t turn out how I wanted. I was sleeping in the van for weeks in the cold 10-20 degree weather before i met Grace. A new friend who let me crash at their place and after knowing me only a couple days asked me to house sit and take care of the pet rats for a few weeks while Grace was away. I was in this big apartment in Brooklyn by myself with a broken heart and that’s when I wrote this new batch of music. Delude is about the trip and how i’d tricked myself into thinking that the story was gonna end well. I wouldn’t change it though, I love the EP too much.”

Delude offers a whole new side of Venta’s songwriting, from the raw heartbreak featured throughout the lyrics in the tracks, accompanied by the 80s-esque synth that marries the emotive qualities of this new body of music.

In addition to the new music, Kid Cadaver will be heading out on tour this summer, starting in Los AngelesSeptember 21st and ending October 1st in Seattle. Full tour dates can be listed below.
Showered with praise from the media such as Substream (“peddles in the type of indie rock that’s not afraid to incorporate electronics and have a good time while still being true to themselves lyrically”), Ground Sounds (“hook-driven songs filled with infectious melodies and vocal choruses”) and The Weekly Alibi(“more than a throwback to ’80s dance music. Kid Cadaver demonstrates the unconfined nature of today’s pop music”), among others, the sudden influx of attention thrust the band into the spotlight. 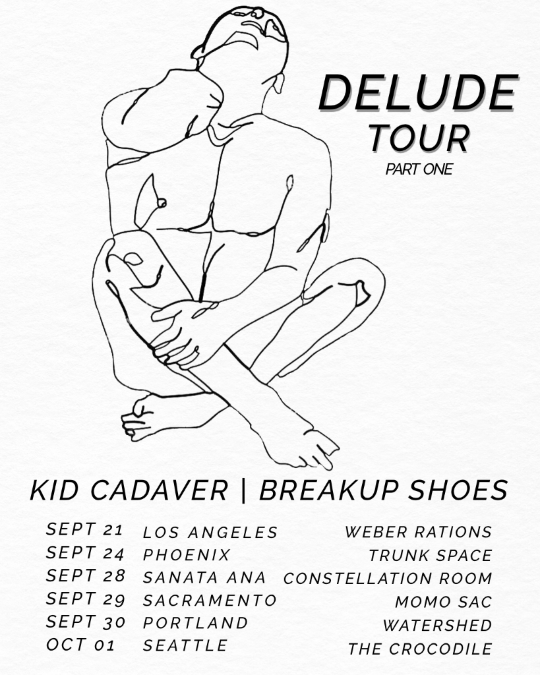